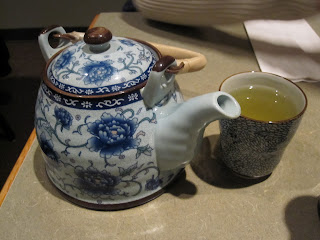 Sushi Wasabi. How can I impart upon you the greatness of this place? I think the only real way to understand why this place is incredibly tasty is for you to go and eat there. However, if you're unable to do that, let me begin with my favourite dish at Sushi Wasabi - their Salmon Sashimi. Salmon sashimi is slices of raw salmon and should not to be confused with salmon sushi which is a slice of raw salmon on a small pillow of rice seasoned with vinegar. It's believed that salmon sashimi is served the way it is (without rice) so that the person eating can taste the subtleties of the meat without being distracted by anything else.

I can't seem to explain it but their salmon sashimi tastes so fresh! By far, the freshest tasting salmon compared to any other Alberta based Japanese restaurant I've tried so far. Try it without any soya sauce and you'll see what I mean. The nice thick slice of salmon is firm and as you bite, a slight sweetness emerges; or is that the taste of freshness? One order of salmon sashimi may seem to be slightly pricier than other restaurants, but the feeling you'll have afterwards is simply irreplaceable. You really do gain an experience in the subtleties and sometimes not-so subtle differences in raw salmon taste and texture.

There are probably a number of items on their menu, but these are the ones that I order again and again - especially the salmon sashimi. Sushi Wasabi serves up traditional Japanese food and they do it very very well! Their quality, taste and attentive service is what keeps everyone going back. Which is why it is imperative that you make reservations at this restaurant. It may seem that they have a nondescript location in a strip mall beside the Sunterra market (in Lendrum area), but this place is busy! Even if you only have two people in your party make a reservation to avoid disappointment.