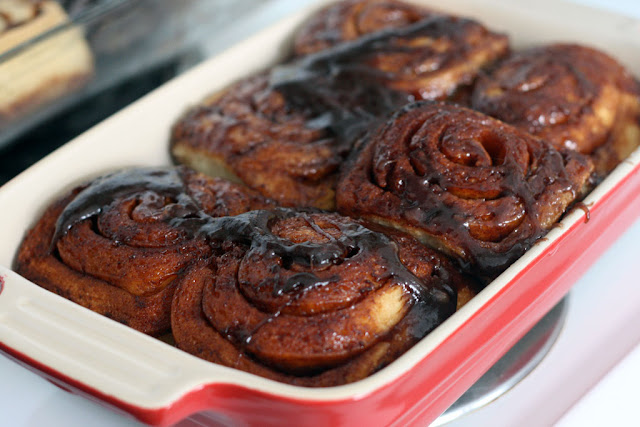 I recently attended the launch for "FEAST: Recipe and Stories from a Canadian Road Trip" in Edmonton at Audrey's Books. This cookbook is the culmination of stories and recipes gathered by authors Lindsay Anderson and Dana Vanveller's road trip back in the summer of 2013. For 5 months they road tripped across all 10 of our Canadian provinces including three territories in a small car. Throughout the cookbook, you get to to experience the beautiful mosaic that make up Canadian culture. They also wrote about the various stories of the Canadian people that they met, the places they visited and the meals that they shared. 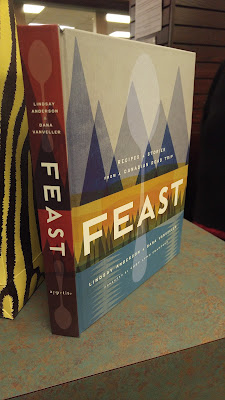 I had heard about the book launch from Valerie (A Canadian Foodie), who had been following the gals ever since they kickstarted their road trip and wrote about their adventure on their blog.

One of the stories that intrigued Dan and I was their Yukon trip where they visited the Braeburn Lodge and ate PLATE-SIZED cinnamon buns. In the book, they were inspired by the Yukon love for Sourdoughs and Cinnamon buns (both things that Dan and I love) and came up with the recipe for Yukon Sourdough Cinnamon Buns. Though the cinnamon bun portions in their cookbook are not plate sized, they were definitely delicious. This also gave me a chance to try cultivating my first wild yeast starter whom I have aptly named "Stuart". I have been given permission to share with you their Yukon Sourdough Cinnamon Bun Recipe so you can make this at home too! Read through to the end for a chance to win the cookbook! 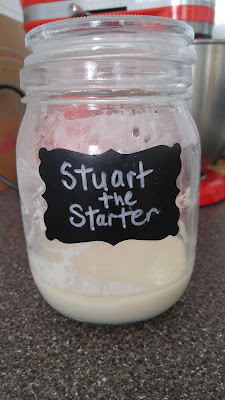 * it takes about a week to get your starter going, so if you are going to make this recipe give yourself time to prep your starter. Dan advises that you actually have two containers so that you can transfer the starter to a fresh container and clean out the old one to avoid growing mold.


Dough:
Filling:
Goo:
Directions:
These were very tasty! Thank goodness they were not plate sized as I would not be able to finish a cinnamon bun in one seating. I'm not usually a fan of very strong sourdoughs so this bun was perfect in the fact that there wasn't a strong sourdough flavour. There definitely was a bit more depth to the flavour of the bun itself compared to just regular cinnamon buns. The textures of the filling and goo complemented each other nicely, the goo created a nice cinnamon maple glaze while the filling spread was thick enough to coat the different layers. There was certainly enough goo factor - which is what I always look for in a cinnamon bun! I did find that I had to bake my cinnamon buns a bit longer, up to 50 minutes in my oven, in order to get a nicely browned colour.

Dan ended up eating two of them since he had just come home from a run in the neighbourhood and they smelled so amazing when he walked in the door he couldn't just eat one for breakfast or was it lunch when we had them?

Now, for the exciting part! You can win a copy of this cookbook yourself! Thanks to the ladies of FEAST and Penguin Random House.

THANKS to Everyone who entered. The winner is @Dishnthkitchen!

You can enter to win* by telling me about your favourite Canadian dish, OR your favourite road trip experience in the comment section below.  Residents in both Canada (except Quebec) AND U.S can enter! Just remember to log your info into the Rafflecopter widget so I can keep track of your entries. Here's how to enter:
a Rafflecopter giveaway


There are a whole lot of ways to enter, and yes, you CAN do all six to increase your chances of winning!  The giveaway starts on Saturday March 18, 2017 and ends on April 4, 2017 at midnight. The winner will be picked at random and I will email the winner on April 5, 2017. The winner must correctly answer a skill-testing question in order to receive the giveaway.

For my fellow Canadians, their cookbook can be purchased from Amazon.ca, or at Amazon.com for those living in the U.S.

*This giveaway can be entered by both readers in Canada or the U.S!