Have you ever had Poke? Poke (pronounced Poh-kay) is essentially a salad with marinated raw fish that is super popular in Hawaii. In Hawaii, poke can be found anywhere - from major grocery stores, Mom & Pop shops, liquor stores and even gas stations. In Edmonton, 'Ono Poke is the second poke stop to open in recent weeks. I love salmon sashimi and was looking forward to trying a marinated form of raw fish. 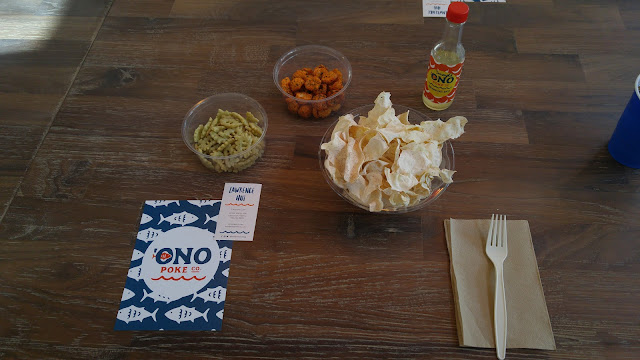 'Ono Poke Co. recently opened in Edmonton on 104st (in fact they had their grand opening this past Saturday). I had the chance to attend a sneak peak a week earlier, prior to their opening, to learn more about their inspiration and concept. Then, this past Thursday I went for a quick dinner with Dan.
'Ono Poke is opened by Chef Lawrence Hui and his desire is to bring authentic Hawaiian poke flavours to the prairies. Prior to travelling to Maui to learn more about poke, Chef Hui had drafted a menu for what he envisioned he would be serving in his poke bowls. After spending a week in Maui in early May, Chef Hui ended up revising his entire menu due to what he had learned from the top chefs in Ka'anapali Beach. Each chef had shared with Chef Hui stories of their Hawaiian culture, diet, traditions as well as traditional and modern flavours of poke.


At 'Ono Poke all the bowls are chef driven and all the poke is mixed by hand to prevent the fish from breaking up. This means that each poke bowl is the way Chef Hui envisioned and designed. It is not a place where you can choose the toppings or composition (though there are some additions you can add). The bowls are available in regular size (approx. 6-8 ounces of rice for $11.95-$14.95) or a large size (14 oz for $13.95-$16.95). There is some customization available in terms of what you want on the bottom of your bowl - furikake (seaweed & sesame rice), seasoned quinoa, or fresh salad. In addition to the 6 bowls on menu, he also hopes to have two special poke bowls available at market price. He also shared that as much as possible he hopes to locally source all the proteins, veggies, slaws, and garnishes. 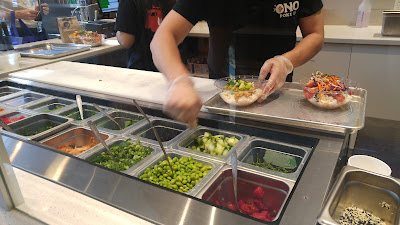 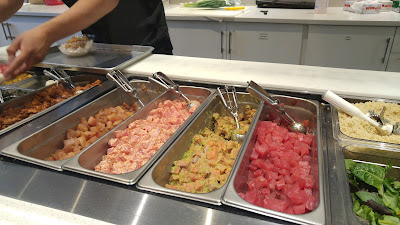 When Dan and I went for dinner on Thursday, we ordered the 'Ono Poke and the G.G. The 'Ono Poke was also one of the bowls that consists of large chunks of ahi tuna (bright red colour!) mixed with shoyu sauce, sesame oil, ginger, white onion and seaweed. This is then topped with macadamia nuts, sea asparagus, green onion, slaw (red cabbage, daikon, carrot, cilantro). I love how their namesake poke is simple, well marinated and each piece of deep red ahi tuna is a substantial size. Also, I'm not usually a fan of tuna sashimi, since I find it very squishy but the ahi tuna was firm and tasty. 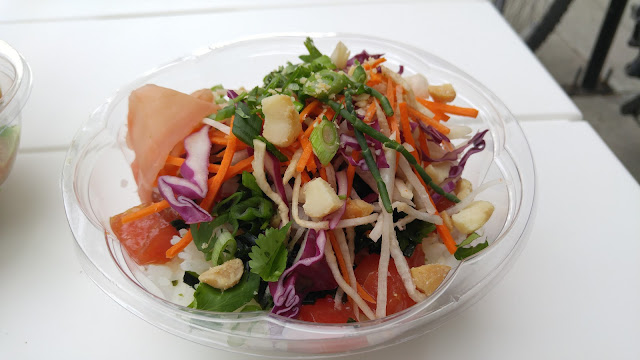 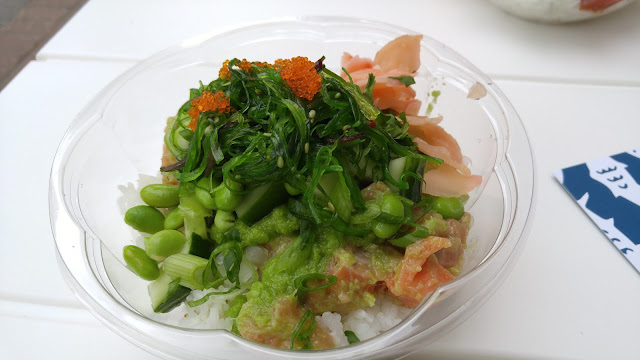 On the day of the sneak peek, I had the chance to also try Uncle Tom's Surf Poke. This poke bowl is named after the Executive Chef of the Ka'anapali Beach Hotel - Chef Tom Muromoto, who was once a professional surfer. This poke bowl consists of ahi tuna marinated with spicy tobiko aioli and white onion. It is then topped with cucumber, edamame beans, green onions, micro greens, sea asparagus and a wasabi. The ahi tuna coated with the creamy aioli, had just the right hint of spicyness. This worked well the with the briny sea asparagus (my first time eating a very thin odd looking to me asparagus). 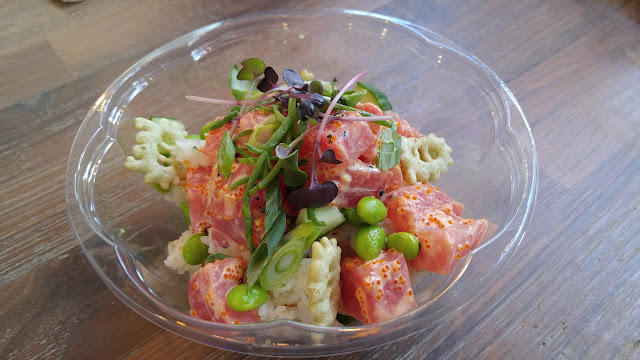 The last poke bowl I tried at the sneak peek was the Prairie Luau. This bowl is composed of gochujang (a Korean spice blend of peppers) marinated braised (then shredded/pulled) pork, Chinese black fungus mushroom, cucumber, white onion, green onion, and house made kimchi. This one certainly packs a punch and is great if you love spicy food. This bowl is more like a rice bowl with pork so I couldn't really call it poke but it's a good option if you don't want to eat raw fish 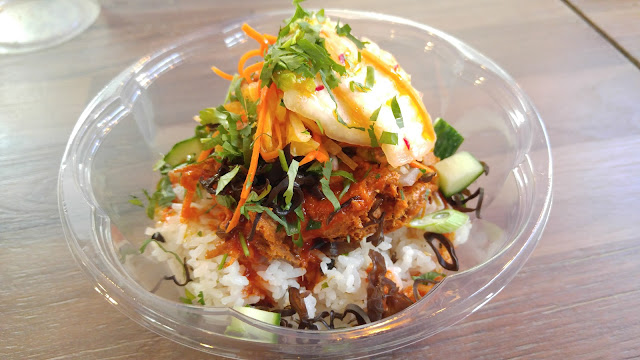 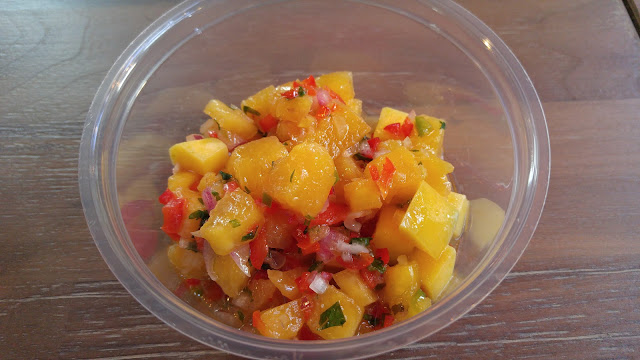 I'm pretty pleased with our poke bowl experience and so glad that 'Ono Poke Co. is offering authentic Hawaiian style poke to Edmonton. I love that Edmonton is starting to have more raw fish options in addition to sushi. 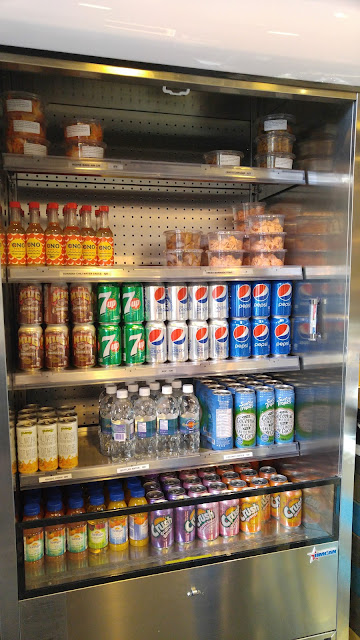 If you are looking for some meal ideas, 'Ono Poke also has fresh marinated poke available for you to take with you so you can make your own bowls. They also sell their own housemade kimchi, Hawaiian chili water (make sure you put some in your poke bowl as you eat), housemade taro chips, and shoyu japchae that you can bring home as well. 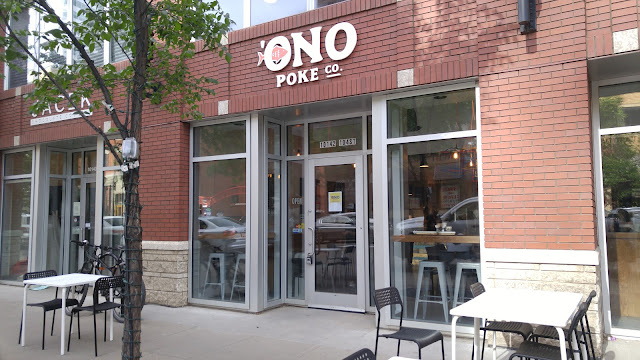