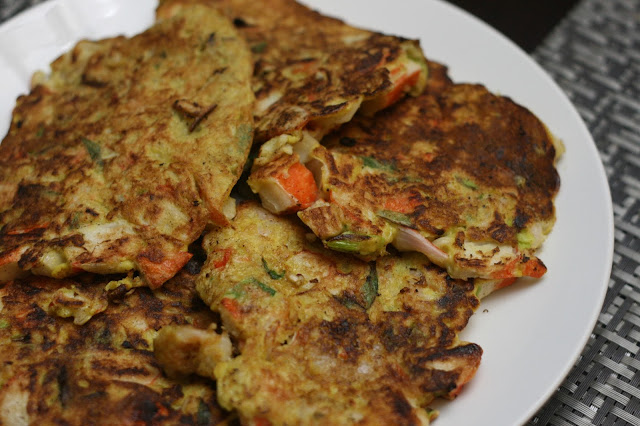 I always enjoy going out to Korean restaurants and ordering my favourite Korean dishes such as: seafood pancakes, Japchae and bulgogi. I received a copy of Korean Food Made Simple by Judy Joo from Raincoast Books. Over the past year, I have made a few of my favourite Korean dishes from her cookbook. I love how Judy easily lays out the ingredients you need, has easy to read preparation instructions and directions for cooking each of her recipes. Some of the initial recipes that I chose to cook from her book veered towards dishes that I personally love ordering at a Korean restaurant or they were hot dishes; perfect for warming one up during the cold winters here in Edmonton. 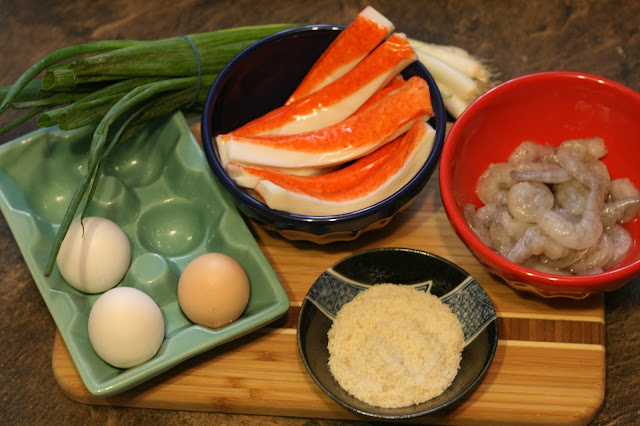 One of my favourite recipes that I have made again and again from her cookbook are the Seafood Fritters (Haemul Buchim). These are little fritters that are filled with pieces of crab, shrimp and bound together with egg and rice flour. The best thing: they are quick to whip up and make the perfect appetizer or snack when you are hungry (which is often the case for me!). These Seafood Fritters (page 53) are made with pieces of crab sticks, de-veined halved shrimp, sliced green onions, eggs, rice flours, salt and pepper. The accompanying pancake dipping sauce that is key! A simple combination of just the right amount of soy sauce, rice vinegar, sesame oil, crushed sesame seeds and scallions. Her recipe calls for gochugaru (Korean chile flakes) but since I didn't have that, I added in sriracha in its place - which is not the same, but worked in a pinch. 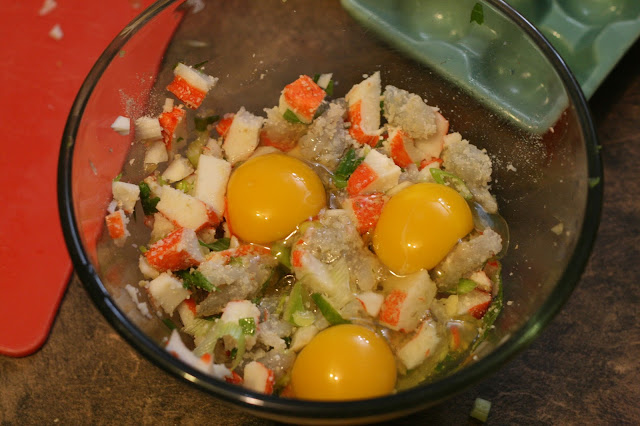 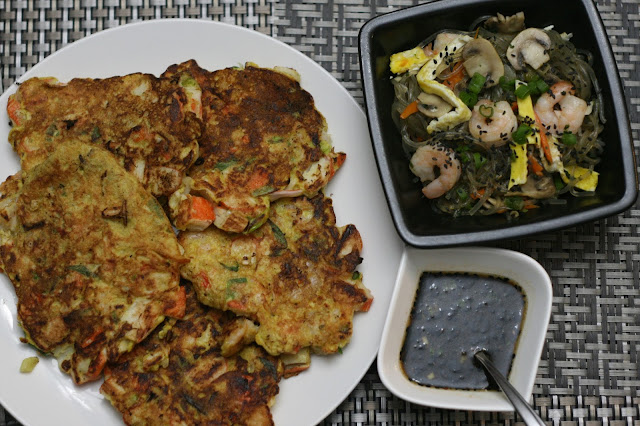 Japchae - Stir Fried Sweet Potato Noodles (page 120) is another one of my favourite dishes. It is made with sweet potato noodles and mixed with a sauce of sugar, sesame oil, and soy sauce. This noodle dish has many ingredients and steps. However, Judy makes it easy to follow by splitting up all the ingredients separately and giving specific instructions for each area. For example, instead of one or two paragraphs describing the entire recipe, she breaks up the noodles, eggs, shrimp, veggies, sauce and even serving instructions into individual paragraphs. I did find this particularly recipe slightly labour intensive as you need to cook the noodles, eggs, shrimp and veggies separately as they each have different cooking times. Then, after everything is cooked, you stir fry and toss everything together. This is similar to how most cantonese style stir-frys are done, but since I wasn't quite familiar with her particular process I needed to make sure I read all the instructions thoroughly before following them. Regardless, the resulting Japchae was delicious and tasted exactly as if you ordered it at a Korean restaurant. 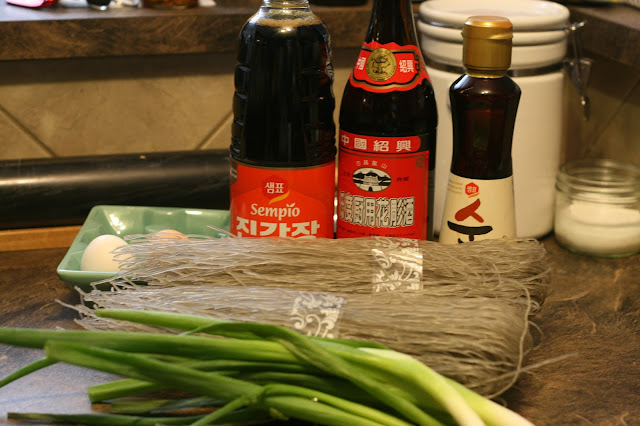 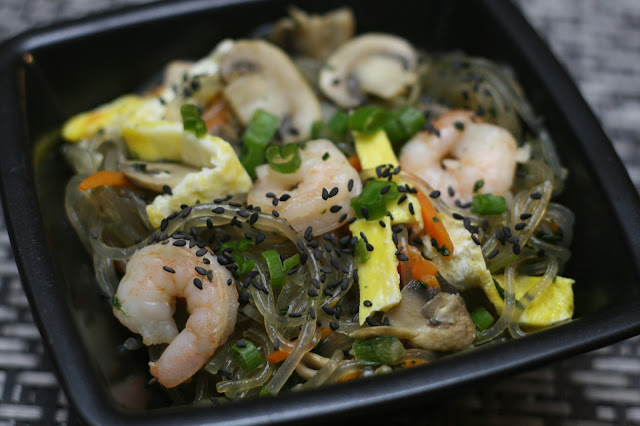 A dish that caught my eye while I was flipping through the cookbook was her recipe titled Mom's BBQ Chicken (Umma's Dak Gogi). Umma means Mom in Korean, and this is Judy Joo's Mom's recipe for BBQ chicken (page 174). In her book she talks about how it is "the stuff of legends" so I certainly wanted to make this recipe for ourselves. First I sliced up the chicken into pieces, then I marinated the chicken in the sauce. You can find the recipe here. 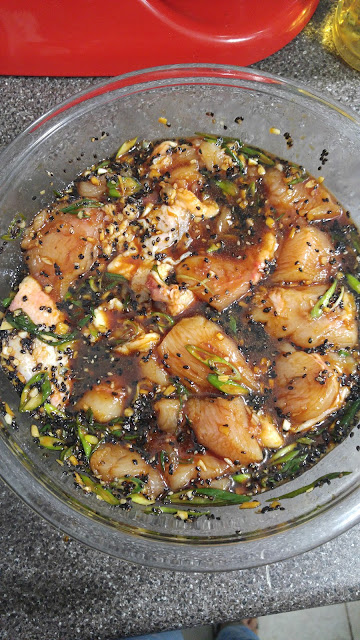 Unfortunately, since we didn't have a BBQ we had to improvise. We preheated our dutch oven in the oven and once it was hot we carefully assembled the chicken pieces using tongs (along with the sauce) into the hot dutch oven and baked the in the oven at 375F. Still following her instructions, about 15 minutes into baking we took the reserve marinade that we had cooked down and glazed the chicken pieces. We served the BBQ chicken with Korean sticky rice and the Doenjang Mayonnaise dipping sauce that she suggested. 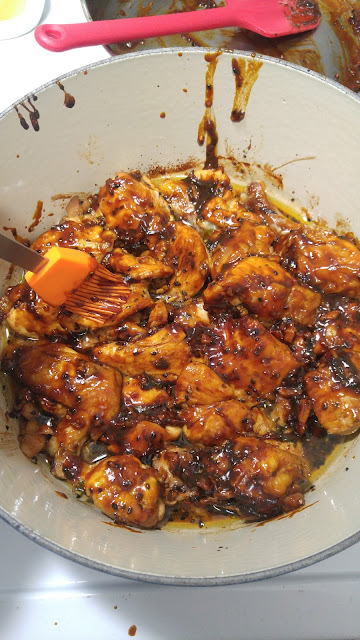 Lastly, a dish I often order at Korean restaurants is Goong Joong Ddukbokki (Thinly Sliced Beef with Rice Cakes). On the day that I decided to make this dish the Korean store that I was purchasing the bulgogi from had made fresh dduk (rice cakes)! Rice cakes can be used fresh or frozen but fresh tastes better but can be rare to find. To marinate the bulgogi the secret ingredient is an asian pear. This helps to not only give a slight sweetness to the meat but also helps to make the bulgogi softer. 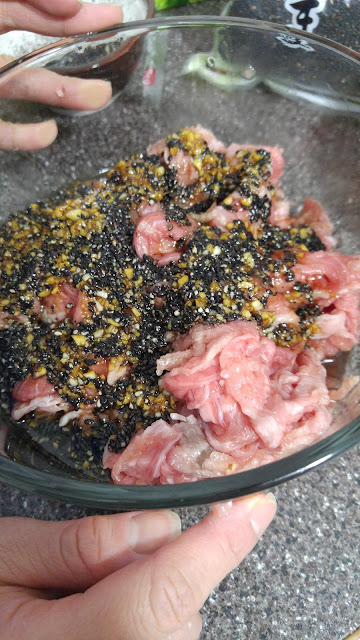 This dish followed that of a traditional stir fry. I cooked down the onions and then added in the mushrooms and carrots. After those were all slightly soft, I added in the bulgogi beef and then finally the rice cakes. Total cooking time was approximately 20 minutes. 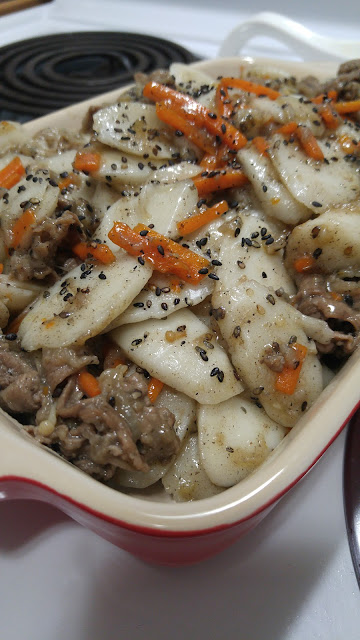 Ultimately, it goes without saying that I have really enjoyed cooking with Judy Joo through her recipes. I also love the fact that every single recipe has a picture showing the final product that helps you see what you're trying to achieve. It's also a given that Korean food can be highly subjective, sort of like how comfort food can be made in different ways. With the pictures and the clear instructions she truly makes it easy and accessible to cook Korean food at home.