It's Harvest BBQ Time - Corn on the Cob and Grilled Chicken 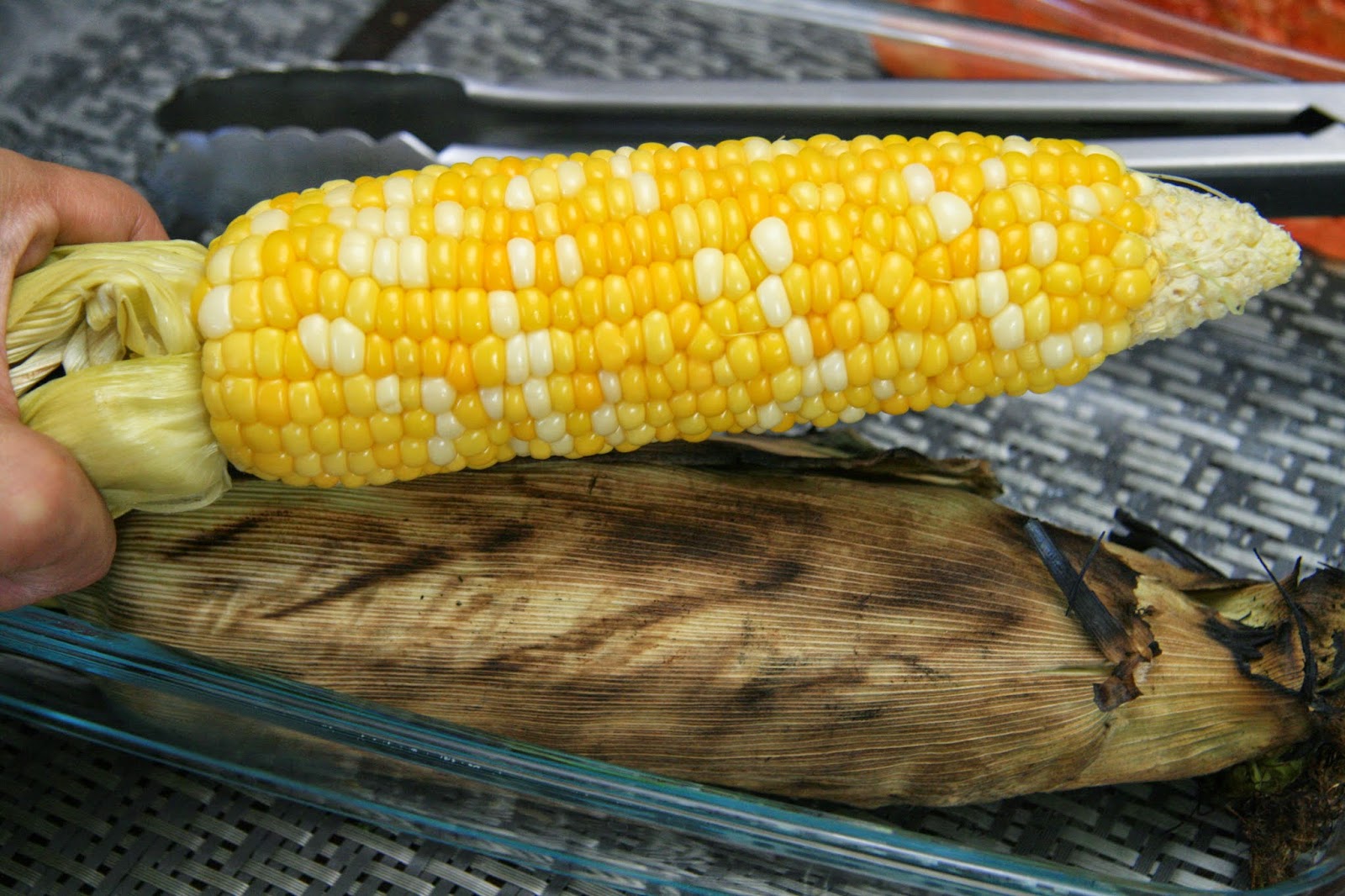 I recently received a review copy of The Kamado Smoker & Grill Cookbook by Chris Grove. Although I do not have a Kamado Grill, my husband and I thought we could still use some of the recipes from the book on our regular Barbecue.

As it is harvest season and there is now plenty of corn, I thought I would try out one of the corn recipes in the book. 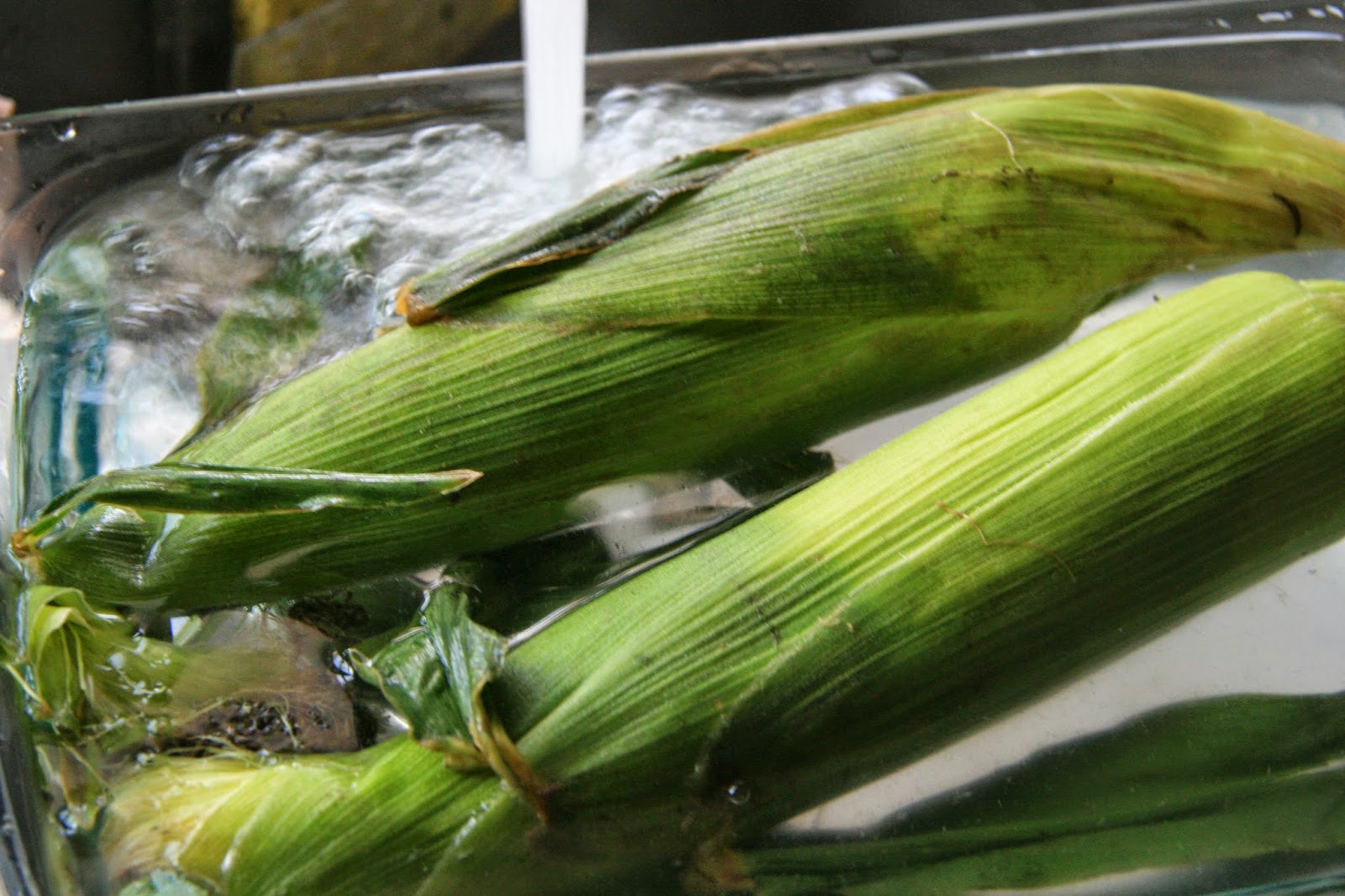 In his book, he describes preparing corn three ways. This is one of the methods. First, using hot tap water soak the ears of corn with the husks on for 45 minutes. 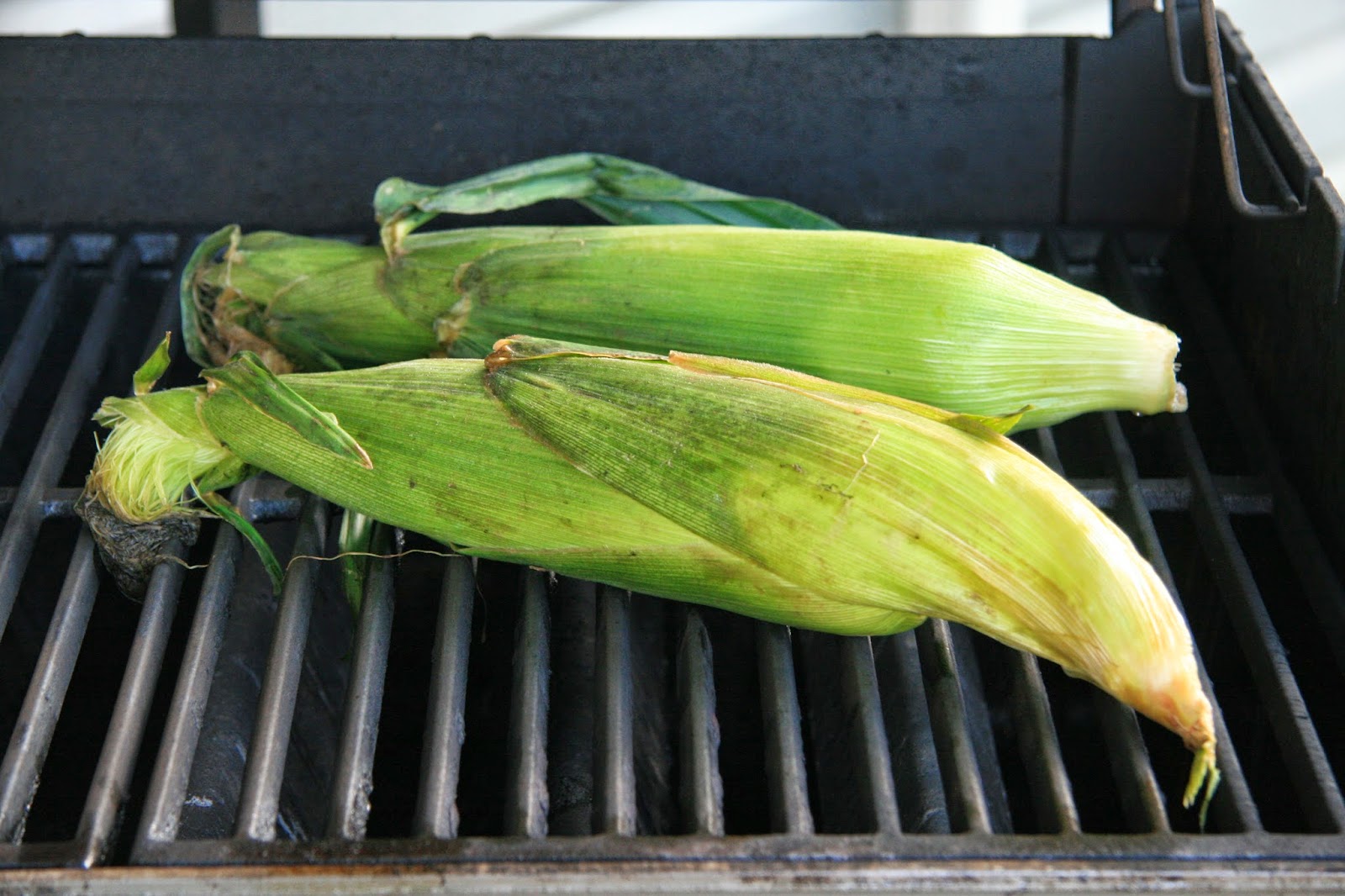 After 45 minutes, remove the corn from the water, shake off the excess water, and then place it on the grill. Cover and cook for 20-25 minutes. Turn the corn every 3-5 minutes. 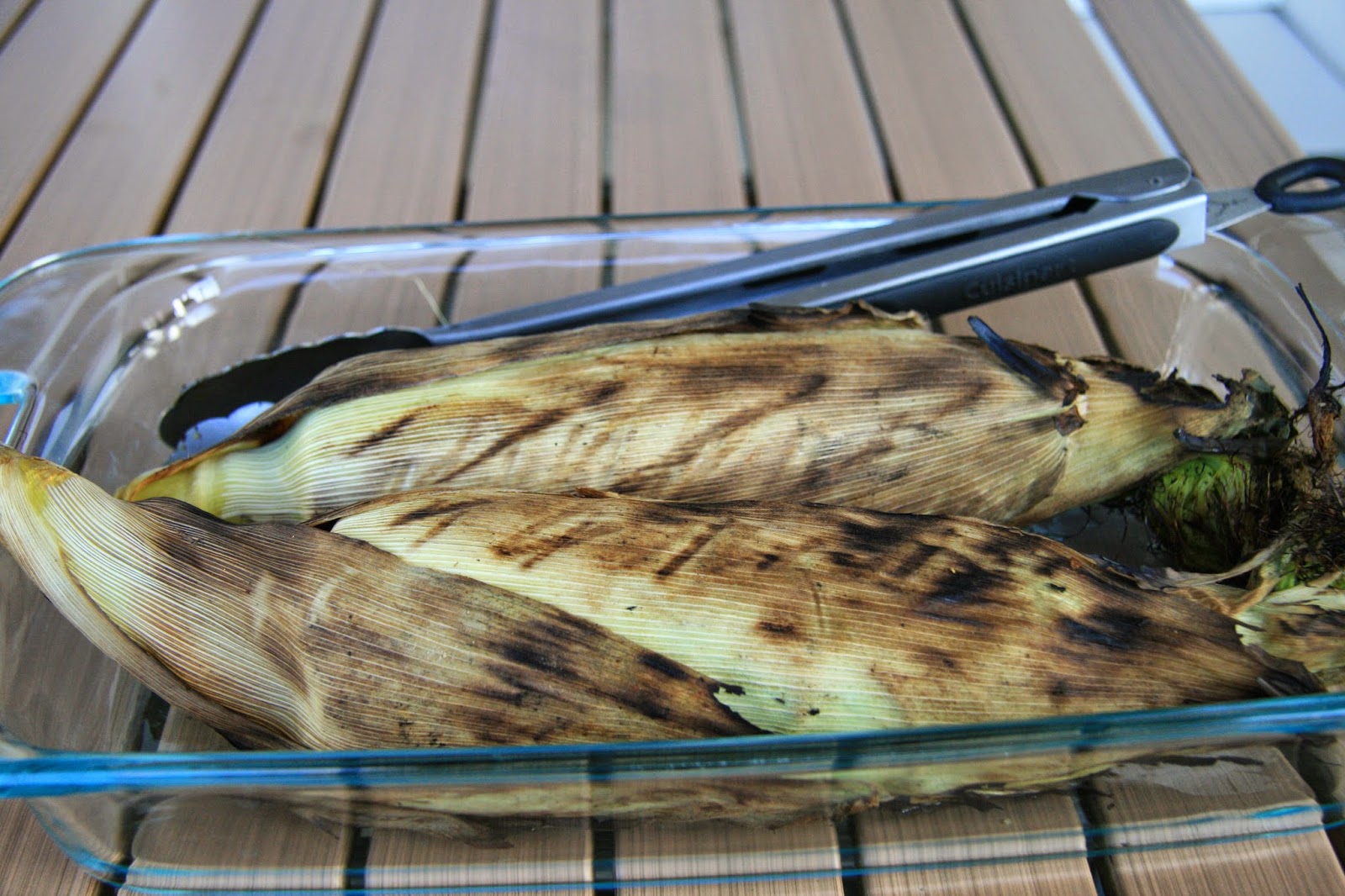 Once the husks look charred, they are ready to take off the grill! 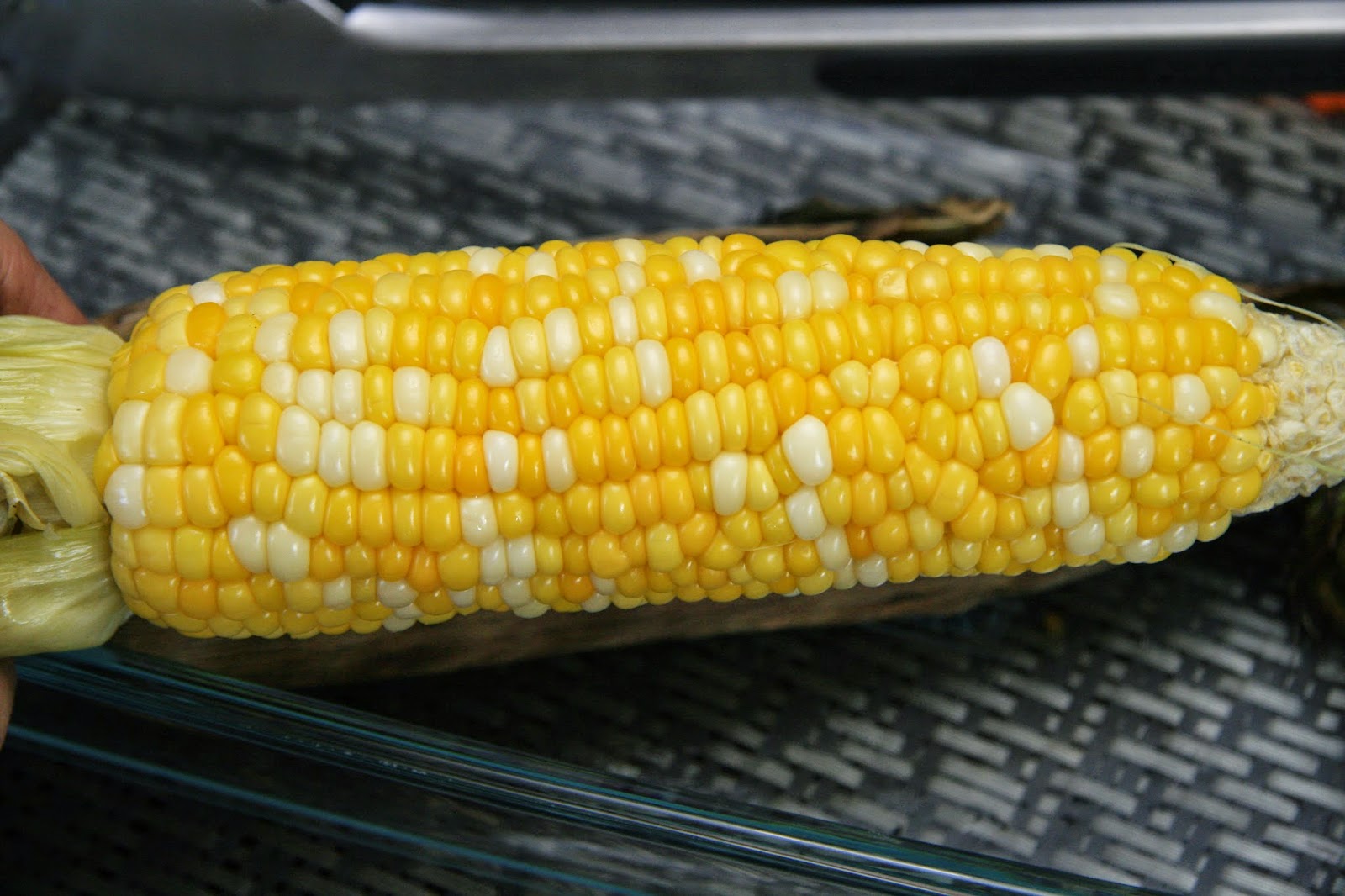 Remove the husk and silks and serve the gorgeous corn on the cobs!

The corn tasted pretty good. It was moist and was not dry using this method. It is interesting that Chris Grove suggests soaking the corn for 45 minutes beforehand as this is likely a way to prevent the husks from catching on fire.

To accompany the corn, I grilled some chicken which was inspired by Chris' "Island-Style" marinade. Chris recommends that you butterfly a chicken breast for quicker and more even cooking. 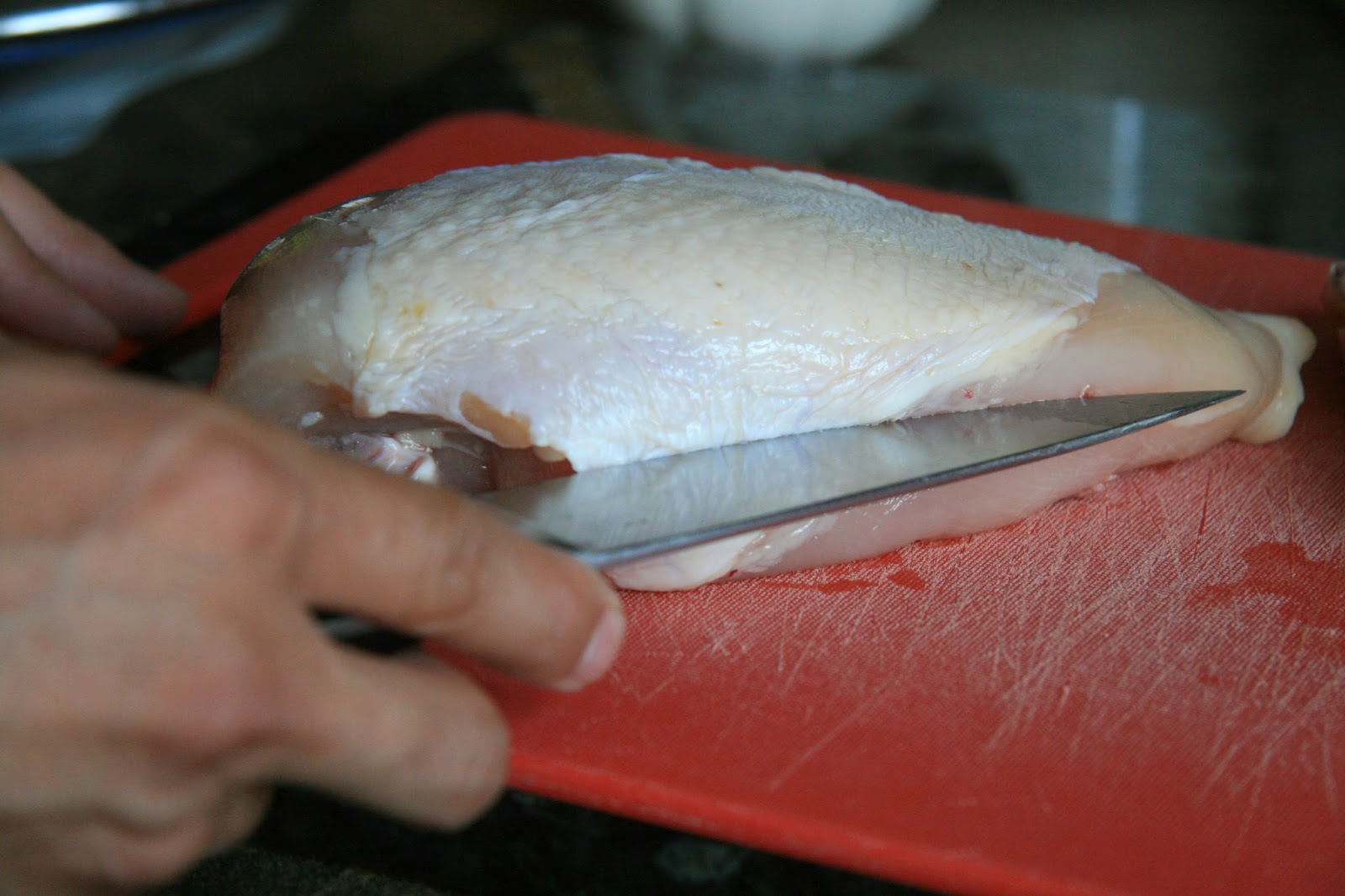 In order to butterfly a chicken breast use a very sharp knife initially making a slow cut along the breast. 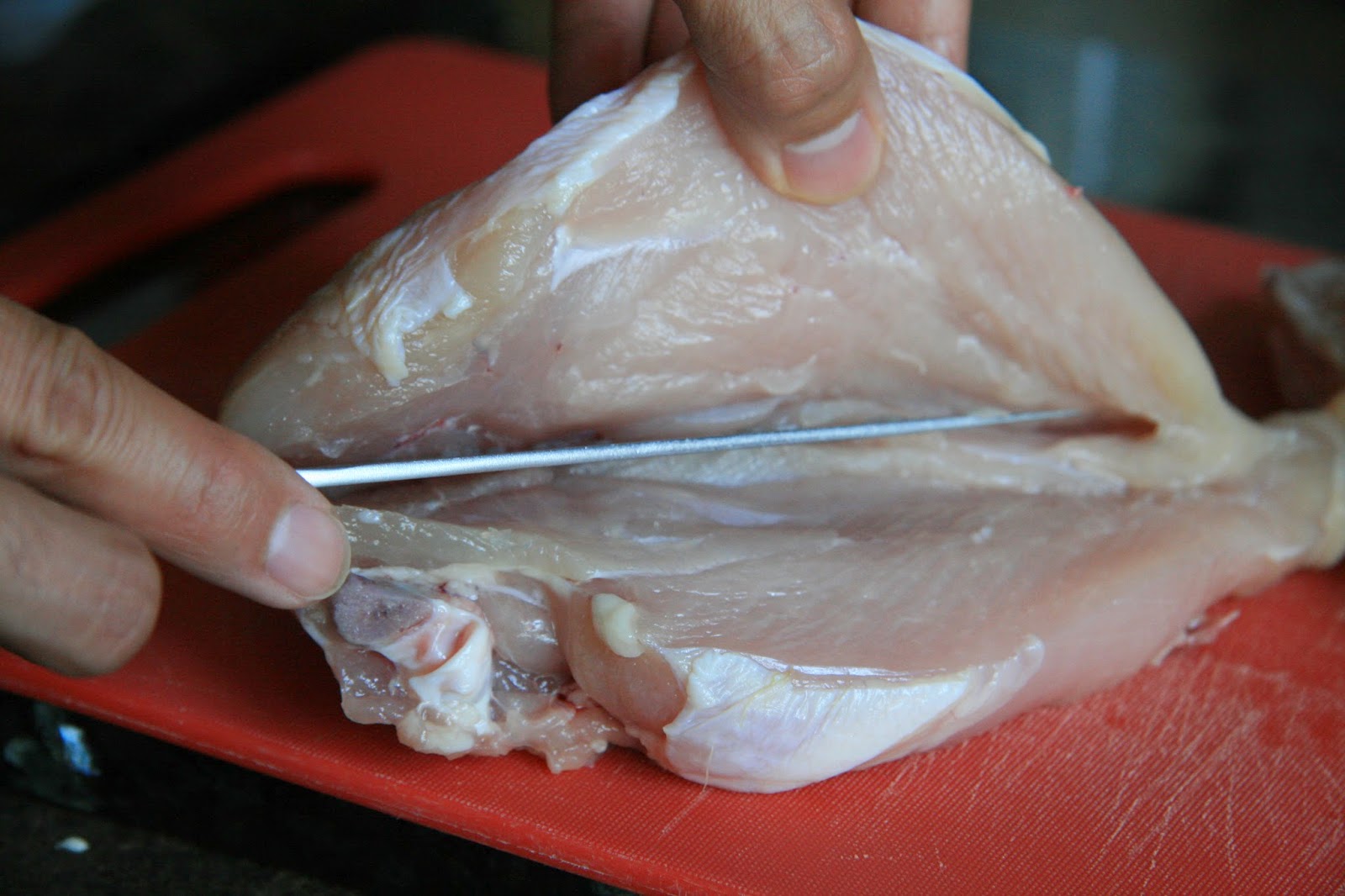 Continue cutting and as you cut peel back the half side of the breast until you reach the bone. 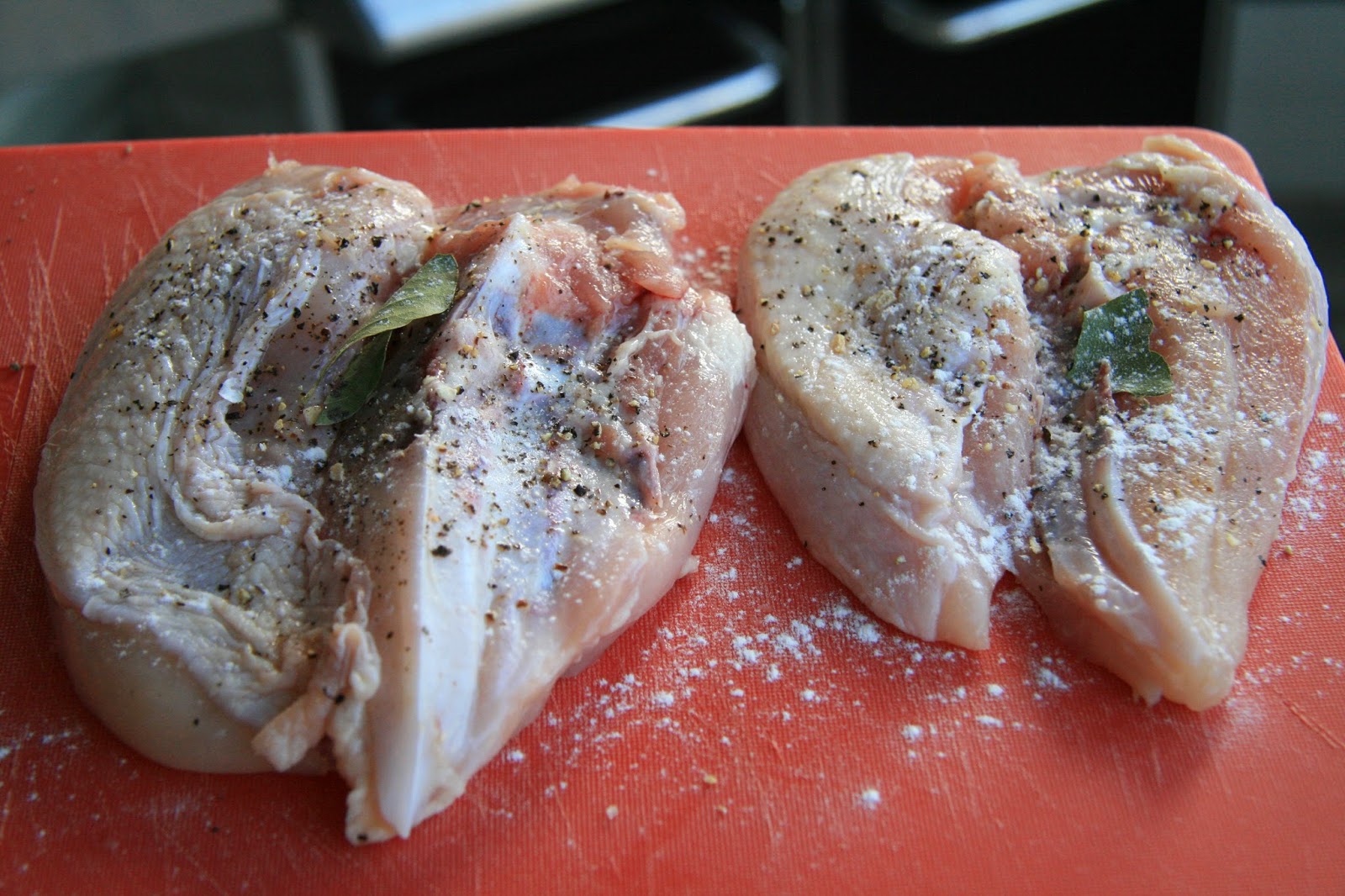 The above photo is the final result of a butterflied chicken breast. Chris' marinade involves using orange juice, lime juice, and other spices. The marinade we used had lemon juice, pepper, salt, bay leaf, oregano and garlic. 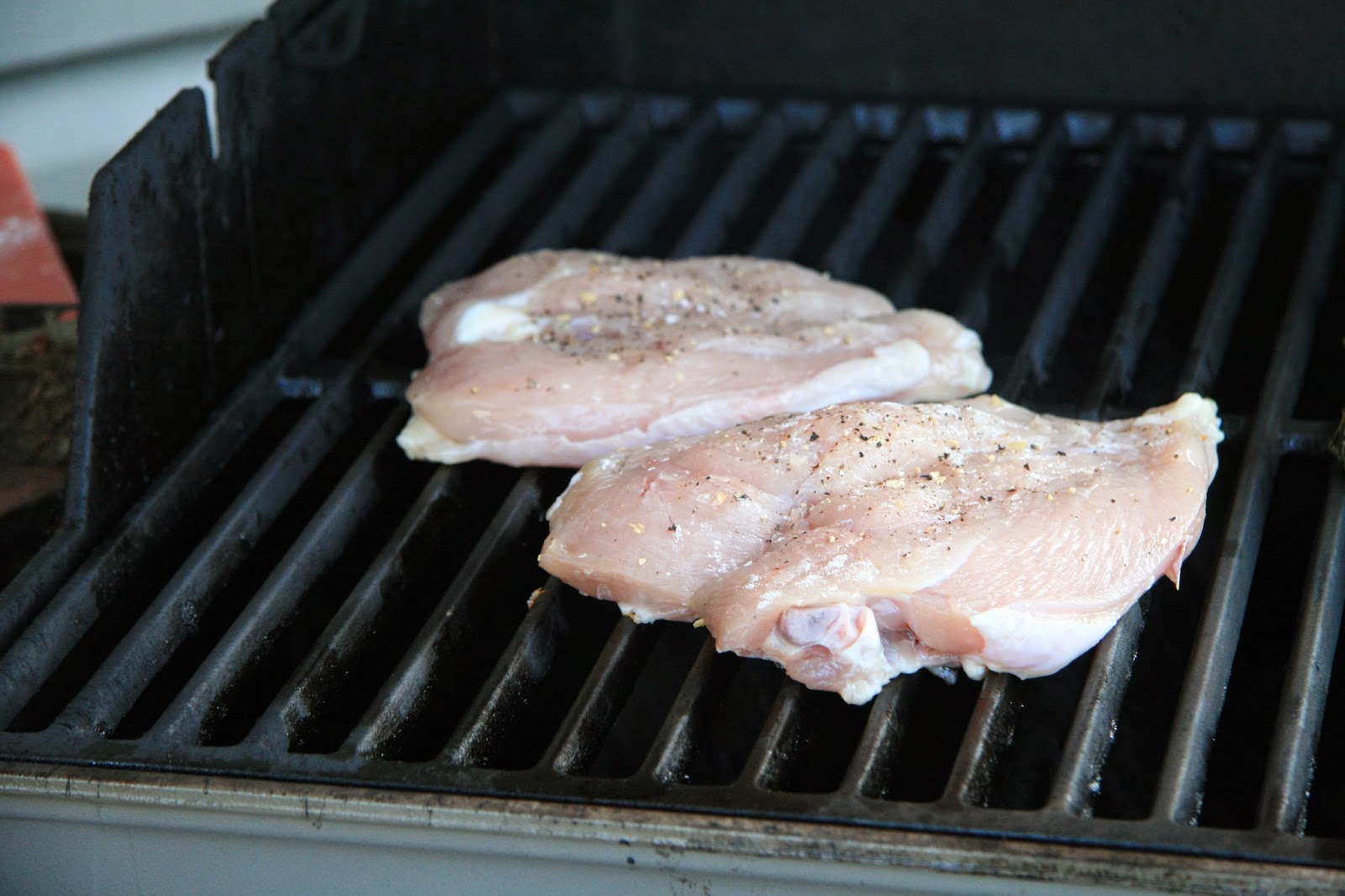 Let the chicken sit in the marinade for about 30 minutes (Chris suggests a few hours), then remove and patting them dry. We then sprinkled a bit of flour and grilled the chicken with the lid closed. 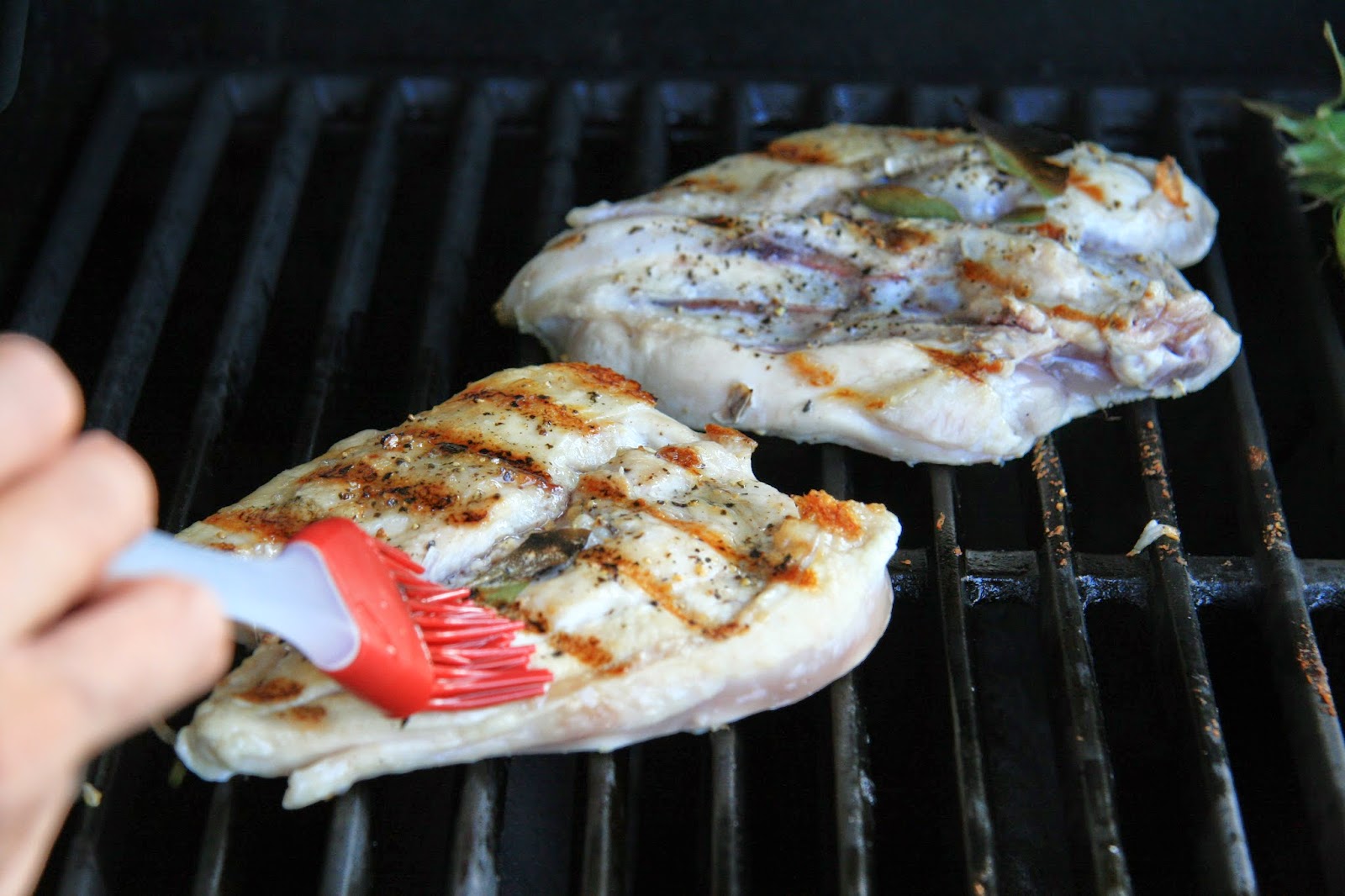 Flip the chicken after grilling each side for 5-7 minutes. Check that the internal temperature of the chicken is 160F to ensure that it is cooked fully. 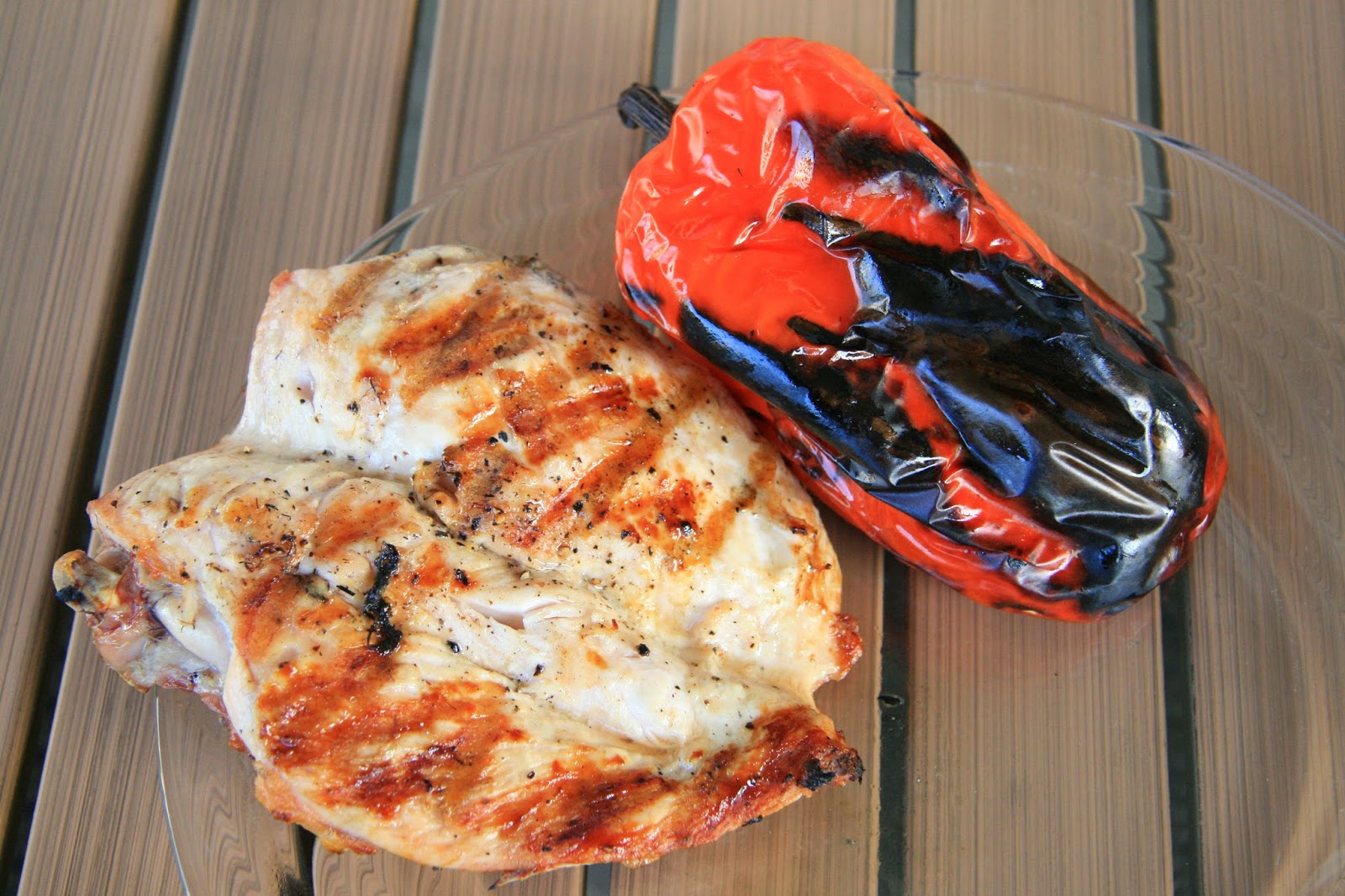 The finished chicken breast with a roasted red pepper.

While butterflying a chicken is not a new method, the instructions in the book for preparing the chicken were very clear and easy to follow. The chicken itself was quite moist and tender, and definitely was not dry from over-cooking.

This is the first barbecue recipe book I've read in depth. While the book is targeted towards Kamado Smoker and Grill owners, all the recipes are compatible with a regular barbecue. We were not able to take advantage of the clear setup instructions for starting/lighting a Kamado Smoker nor temperature control; however I think it would be very useful for first time Kamado owners.

It is nice that every recipe is accompanied by pictures for most of the steps so the reader will know what they are trying to achieve. Chris also has lots of great recipe for rubs and various techniques to ensure that enough flavour imparts onto the meat that is being grilled. There are also some creative ideas for baking (e.g. baking fish, baking bread) as most people do not think of using their grill in that way. My husband is also looking forward to trying some of the other techniques in the book such as "reverse searing" and "hot tubbing".

I think that this book is worth checking out if you have a Kamado Smoker & Grill and want more ideas. This is also a good introductory book overall for anyone wanting more ideas on using their barbecue to its fullest.
September 21, 2014 Labels: dinner reviews