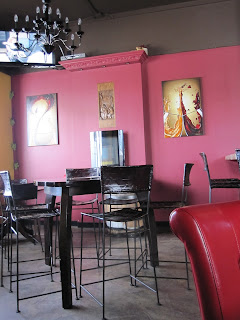 Several weeks ago,  I had the chance to check out "The Bothy" for lunch. We decided to sample both their share plates of cheese & charcuterie as well as their soup of the day & sandwich. Sharing plates seemed reasonably priced, comparable to the one that Danprime & I had at The Bison in Banff. Any 2 items from cheese & charcuterie was $12, any 3 was $17 and so on.  First up, the Colston Basset Stilton from England paired with a smoked meat from Alberta.
We chose this Charcuterie as the very helpful server pointed out that it would only be on their menu until Monday. So, of course, we had to take advantage of this limited edition Charcuterie! 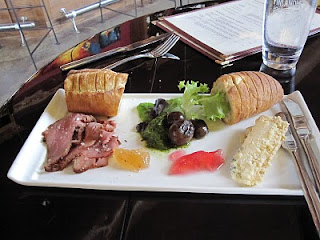 The bread that accompanied this platter was quite delicious - with a soft, yet crunchy feel to it. The Stilton was quite a powerful cheese, seeing that it borders among the family of blue cheeses. Danprime enjoyed the soft and lingering taste of the cheese, while I on the other hand ate 2 lactaids to ensure that I too would enjoy the meal :P  mm..either way, it was a tasty combination. However, I'm not sure if I was a big fan of the 'jelly' that came with the platter as they did not seem to go well with the cheese & Charcuterie. For the price, and the amount that we were given, I'm thinking that having a few more slices of Charcuterie or some additional accompaniments would have added to the plate. 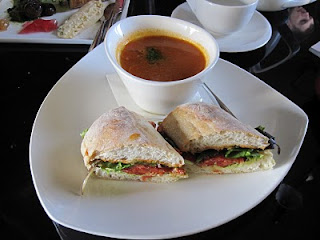 The squash & bacon soup finished with a hint of cream was equally appetizing, although small in portion sized. Having it with the maple yam spread, roasted red peppers, calabrese and chevre sandwich seemed a good choice though. The sandwich had a bit of heat, but the yam spread help to balance the spice in the calabrese. Overall, an enjoyable lunch time meal with good service, food and company.