Re-Cap of the Croissant Bake-off 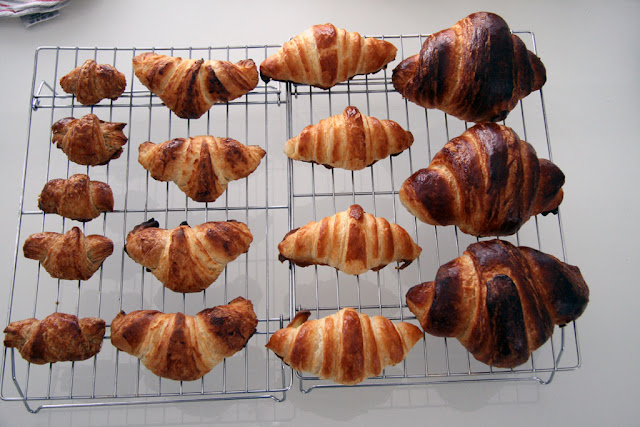 As promised from my last post, here is the re-cap from our Croissant Bake-off where I baked the Duchess Bake Shop croissant using their cookbook, Dan baked the sourdough croissant from Tartine Bakery's cookbook, Addie baked David Lebovitz' Whole Wheat Croissant and Lesley followed a croissant recipe from La Cuisine Paris. 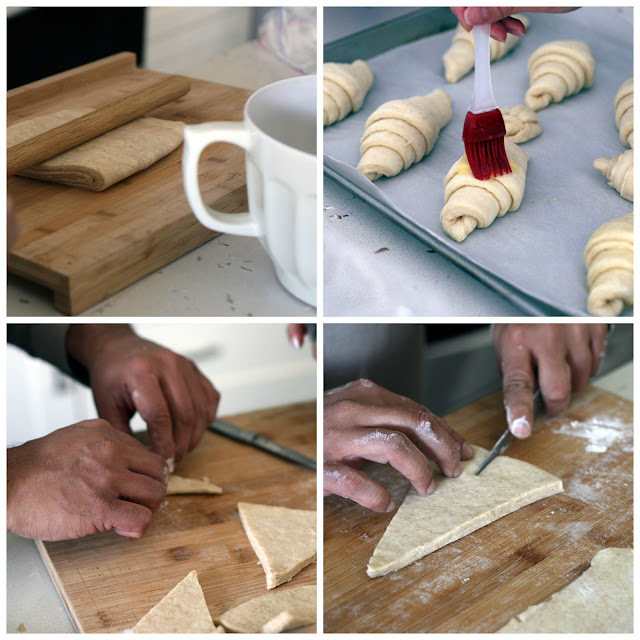 The plan was that everyone's croissant dough was to be mostly prepped upon arriving at L & S' house and then the croissants would be baked off in succession. Above, is a picture of everyone prepping their croissants doughs to roll out, proof or preparing the egg wash for the oven. 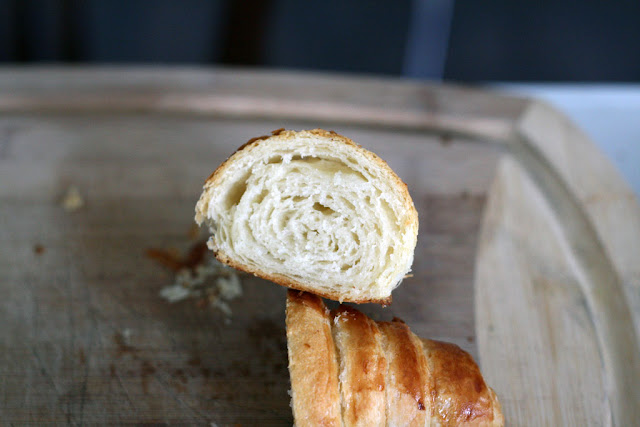 One reason for us baking all the croissants around the same time frame was because we wanted to see the cross section of each croissant fairly soon after they have been baked. Above is the cross section for the croissant I baked (using Duchess Bake Shop's recipe). You can see that there are a number of layers and some space in between the layers. 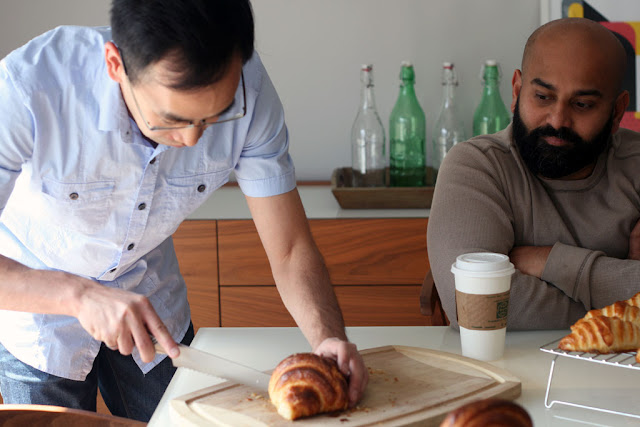 Dan's croissant using Tartine's sourdough recipe is out of the oven! Here Dan is cutting a cross section of his, under the watchful eye of Addie :D. 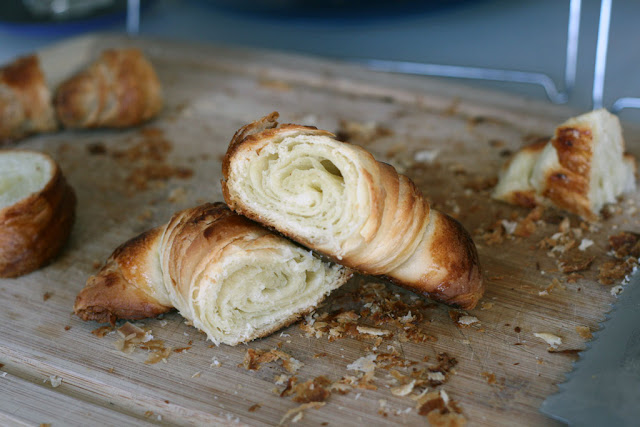 Here is the Parisian recipe that Lesley baked. As you can see, it also has a number of layers as well as a flakiness to it. 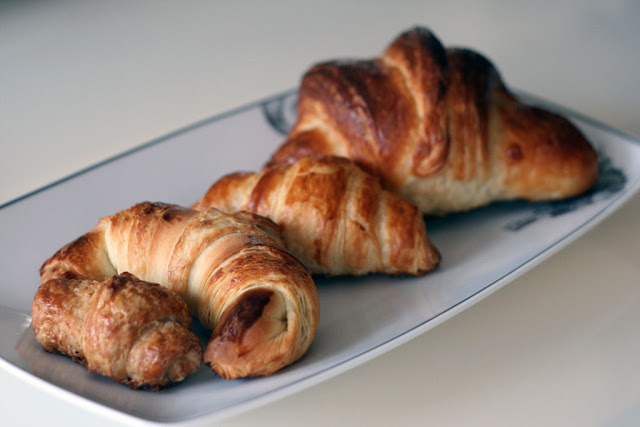 Here are all the croissants lined up according to size. Now, Addie did say that he cut down his whole wheat croissant dough in half so usually they should be similar in size to the Parisian and Duchess' croissant size. 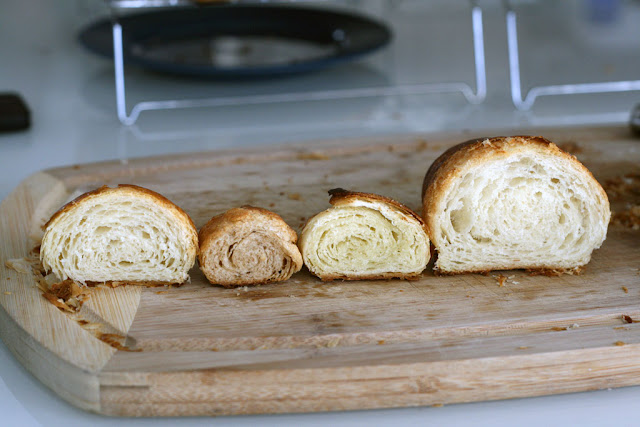 Cross-section of all four of the croissants. From left to right: Duchess' recipe, David Lebovitz', Le Cuisine Paris and Tartine's croissant. One big difference is the use of flour across all the recipes. Granted, Addie used 60% whole wheat flour his. Tartine's recipe called for 100% bread flour, Duchess' recipe used mostly all purpose flour except for bread flour in the starter, and the Parisian recipe was 100% all purpose flour.

In terms of flavour, Lesley used the most expensive butter out of the four of us. Using more expensive butter with a higher fat content does not affect the flakiness but it definitely showed in the smell and taste of the croissant. The Tartine recipe used a sourdough starter so that croissant had the distinct creamy sour dough taste to it. However, it also had the nicest volume and colour compared to the rest.

In terms of texture, Tartine's recipe asked for 100% bread flour which results in a breadier croissant whereas using 100% all purpose flour will result in a flakier croissant like Le Cuisine Paris' recipe.

Overall, we found that the Duchess recipe was the most accessible for the first-time croissant baker compared to all of the other recipes. Mostly because there are step by step pictures to accompany the easy to follow instructions, exact descriptions for size, dimensions and how many croissants would be made. In comparison, the other recipes needed a sourdough starter to be made first before even starting, and lots of technical details for rolling and folding with fewer pictures. 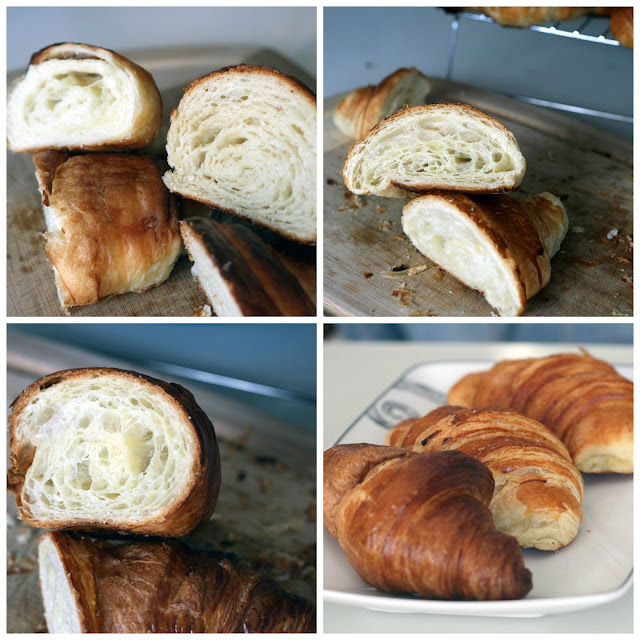 Lastly, we compared the croissants we baked with the ones from local bakeries. Cindy (from Lets Om Nom) bought croissants from Cafe Bicyclette, Bonton Bakery and Leva. Sadly, she didn't have enough time that day as she was already criss-crossing the city for croissants from Duchess. 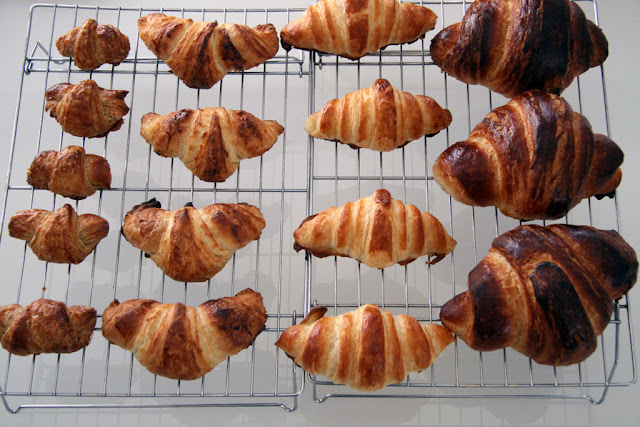 So in the end, if you are considering baking versus buying croissants it is worth trying to bake croissants at home - at least once. There is nothing that can compare to the aroma of fresh baked croissants at home. It does take roughly 6 hours of work, even with me following Duchess' easy to follow recipe so I can see how that can be a daunting task.

However, to make it fun ask a couple of friends to join you in the process!
June 15, 2015 Labels: croissant pastry