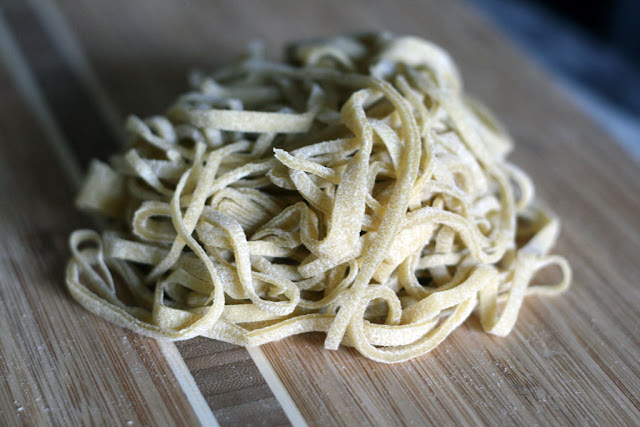 Thanks for all your questions and feedback on my last post on making ramen noodles from scratch.

One of the questions that was asked was: "What if we don't have a pasta roller, can we still make noodles?"

This post is going to be about a hand-rolling technique. I came across this during my attempts at making Soba Noodles (coming in a later post). Soba noodle making involves a series of complicated kneading, folds, and rolling which I won't be covering in this post.

Instead of a pasta rolling machine you'll need a rolling pin and a sharp knife (preferably one with a flat edge like a cleaver).

Follow the recipe for creating the dough for ramen (ver. 8) up to dividing your dough into 4 portions. The size of the portion I'm working with is about the size of a closed fist.
There you have it, hand-rolled, hand-cut ramen noodles without a pasta roller. Once you get used to the technique, it doesn't take a significant longer amount of time (about 5-8 minutes more) than using the roller. The pasta roller is definitely more efficient compared to hand rolling but I've (secretly) tested this on Lillian and she didn't notice the difference (in taste or texture) until I confessed.

As mentioned at the beginning, I came across this technique while trying to make soba noodles. I will continue to use this occasionally to practice my rolling technique for our pastas and ramen so that my soba noodle making skills will get better. One of the aspects that I'm working on is to maintain a uniformed rectangular shaped dough throughout the entire rolling process. In other words, the "tongue" should not be a pointed, it should be flat and as wide as the rest of the dough. This will prevent weird indentations in your dough.